The world is transforming. And, thanks to the internet we are able to keep up with this ever-faster changing world. It allows us to learn and work from remote places where technology is tremendously backward.

However, if someone is using the internet to its fullest, they would be in the workplace. As they can use the internet anywhere from the earth without being present there. WiFi Access Point and Extender are one of the major examples of wireless devices.

But people are confused about which one they should choose for their large workshops and houses. In this wifi access point vs extender article, I will discuss them deeply with you and also will recommend you some top-notch Access Points and Extenders. So, let’s start with,

What is the Difference WiFi Access Point VS Extender

A Wireless Access point is a device which creates a wireless local area network, in short WLAN. The other devices can connect with the WLAN. Generally this kind of network suites for medium to large offices or buildings.

To operate, a wireless AP(access point) connects to a modern switch, hub or it can also be a router via an Ethernet cable. And it projects Wi-Fi signals to a designated area. So, in short, it is a medium to carry a Wi-Fi signal in distant places. For this nature of AP, it is suitable for large places.

For example, if you don’t get the Wi-Fi signal in your office reception area, you can enable Wi-Fi access there with Access Point. You need to install an AP near the front desk or somewhere in the room you want Wi-Fi access and connect it to the server room via an Ethernet.

The best thing with Access Point is that it doesn’t compromise with the network quality. But you need to make sure the AP device you are using is rather good. To erase your worries, I added some market’s top APs here. 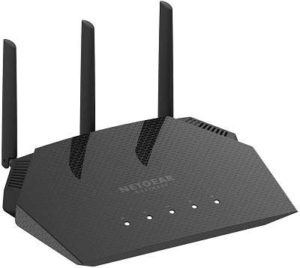 I’m not sure what to call it precisely, an access point or a router? It is better to call both. The reason I put this router/access point at the top of this list is the Netgear WAX204 is not only cheap but also provides a brilliant performance.

It’s true that it doesn’t offer the bells and whistles as expensive options, but it includes more than enough to satisfy your needs.

Moreover, about 64 clients can connect with this at once, which is quite a massive range. The study built will allow this to sustain for a long period of time.

Although it has some flaws, as an AP I don’t think you will have any problem with the limited Wi-Fi setting of this device. And overall performance and low price make a great deal out of it. 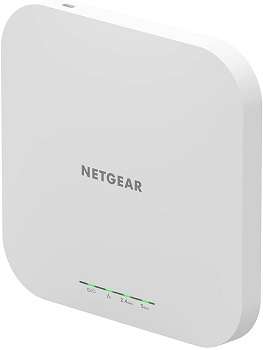 Netgear WAX610 is another excellent product of Netgear. Unlike the previous one, it is solely an access point. This device is designed to improve the network stability and performance of SMBs.

So, in simple words, the AP is suitable for offices with heavy traffic, video conferencing for its competence to handle a huge number of clients at once. And recently, WAX610 is optimized to work with 802.11ax(Wi-Fi 6) technology; in other words, works with all modern devices.

Netgear WAX610 is a dual-band, AX1800 access point. It provides total output speeds of 1800 Mbps to the connected devices. However, it doesn’t come with a power adapter, so you have to buy it separately.

Instead, its performance is enhanced by its simultaneous dual-band operation. Thus, offer you faster speed, better coverage.

The price of this AP is also quite moderate. With all the features, I think it is a great deal for users. But, sometimes this device overheats, so it is recommended to keep it turned off for some time during the day. 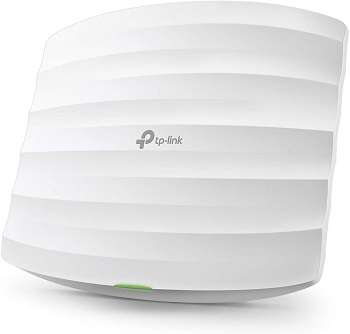 SMEs looking to build a powerful wireless network on a shoestring will love TP-Link’s Omada EAP225 V3 as this AC1350 access point (AP) only costs a shade over 50.

Even better, TP-Link includes its Omada Controller software as a free download so they can run the AP in standalone mode and swap over at any time, and centrally manage multiple TP-Link APs from one web console.

There are no compromises on business features either, as the EAP225 V3 supports concurrent 2.4GHz and 5GHz operations.

More importantly, it uses MU-MIMO (multi-user multiple inputs multiple outputs) technologies to increase the number of lanes on your wireless highway, allowing it to support a large user base without causing congestion.

What is an Extender?

Extenders are simple wireless repeaters. As its name implies, extenders extend the rage of your already existing wireless connection. It creates a replica of your present Wi-Fi network and works as a support to boost the Wi-Fi coverage of that network.

If your router is on the top floor of your two-story building and you don’t get a signal in the basement. So, you can install an extender on the ground floor, where the connection is still strong, and it will eliminate the dead zones in your basement.

However, it may sound like the extender and booster are the same things, but they are not. An extender is capable of providing a stable network where the booster is not, and also the coverage area is larger for later than the former.

As before, I’m going to suggest to you some of the market’s top but affordable extenders. So, here we go – 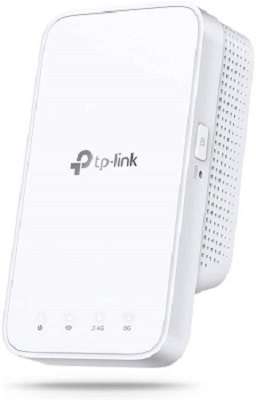 TP-Link’s RE300 extender works with A7, C7, or MR600 routers. The setup of this mesh is easy, even for the network novice. This extender boosts the internet coverage area up to 1500 square feet and connects with up to 25 devices at a time. And, it comes with two access points – 2.4GHz-300Mbps / 5GHz-867Mbps.

It eliminates all dead zones and offers a lag-free connection to all types of devices. However, it doesn’t support an Ethernet connection port. And, as for connection, it expands coverage for your smartphones, smart tv, Firestick, Google Chromecast, web browsing, Alexa Echo, Ring, and more.

As I said, the setup is extremely simple. And one mash technology enables the network for seamless roaming when paired with the Archer A7 router.

However, if you don’t own Archer A7, C7, or MR600, then this mesh network is not worth the high value compared to any standard extender. 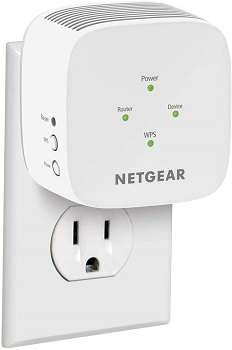 One of the most famous Wi-Fi extenders available on the market – Netgear ex5000. This extender eliminates all the dead zones in your apartment and offers you a fast lag-free network.

It adds Wi-Fi range coverage up to 1500 square feet. And you can connect up to 25 devices of all types such as laptops, smartphones, speakers, IP cameras, tablets, loT devices, and so on.

EX5000 provides internet speed up to 1200 Mbps with any kind of router, gateway, or cable modem with Wi-Fi.

And, to protect your devices from any kind of hacking, it supports WEP and WPA/WPA2 wireless security protocols. And the setup is also simple. All you have to do is press the WPS button to connect with your router.

The price of this gadget is also cheap compared to other systems. It doesn’t hinder the internet speed that much either.

You may like:  Best Modem Router Combo For Comcast

Tp-link RE-450 is one of the top-rated and most famous extenders of Tp-link. This dual-band machine is a powerful extender with 450Mbps on the 2.4GHz band, and 1300Mbps on the 5GHz band. Moreover, it has been the PCMag editor’s choice for wireless range extenders.

It provides a larger coverage and better speed than previously mentioned wireless extenders, covers around 2000 square feet, and connects about 32 devices.

The installation of this device is also easier, especially if your router supports WPS. You can do it in a snap by pressing both machines’ WPS buttons at the same time.

For connection, you can connect RE450 with any type of device. It does an excellent job passing signals through walls. Although the device is quite bulky and it lacks a pass-through outlet, overall performance and low cost make it worth being one of the market’s top leaders.

Most of the time, the terms ‘Access Point’ and ‘Extend’ get mixed up. But, they are used for different types of networks and purposes, and you already know this at some point. Let’s see a detailed comparison between these two network types.

As I mentioned just earlier, the access point and extender’s meaning get confusing when explaining them despite the differences being vivid. Access Point is also known as AP is a wireless networking gadget, which allows your wireless devices to connect with it through a wired network using wireless technology.

On the other hand, Extender, well-known as a repeater, is a network device that extends the coverage area of existing wireless networks.

In simple words, AP works as a centralized network hub, oppositely, Extender works as a booster of existing networks.

An access point is a centralized hub of a wireless network. This allows various devices to access any network resources the users have permission to. And it creates its own separate network to operate, which has different security panels. On the other hand, Extenders just enhance the coverage of existing areas. So, you don’t need any password or switch connection while connecting from router to extender.

Access points are much more expensive than extenders for their separate functionality. The cost greatly varies with the distance between the device and the host in the case of Access Point. This is because you need to buy a wire of your needed length to connect AP with the main host. So, it cost quite a lot for access points.

On the other hand, you don’t need to buy anything with Extender except the device itself. And all you have to do is place it in a location where the connection is still strong and you can enjoy seeming less speed on dead zones too.

As from the above explanation, you may already guess the coverage and speed are limited to Extender. However, you are not restricted to any distance with an access point. So, the access points are more suitable for businesses with large construction. And Extenders are for home uses.

Extenders connect with the host(router) wirelessly, on the contrary, access points connect with the host(modem/router) via wire. Thus, extenders reduce throughput because wireless LANs are half-duplex, meaning they allow two-way communication, however, the throughput is not consistent. So, it is reduced to half. But with a physical wired connection, this problem can be eliminated.

In other words, the speed of your network gets half with extender and this will continue the more you add to further expand your coverage area. On the other hand, you won’t find this kind of problem with Access Point.

So, this is another reason for businesses to prefer an access point rather than an extender, as the formal is suitable for office situations rather than the latter.

So, both types of networks have their own benefits and flows. Extenders are easy to connect, cost-effective, and don’t need hassle with setting up wires or so on. But speed reduces to half every time you use an extender to extend your coverage range.

On the other hand, Access Point maintains the same speed as your main host. But they are expensive, need to set up separate passwords and names for different APs, and are the least, very troublesome to connect with wire to connect with the server. So, if your office is not so big I personally recommend extenders to use, but in big offices, you have no way but to use Access Point.