Panasonic LUMIX FZ300 Review – Is it worth your money?

In the diverse archive of long-zoom digital cameras, there are a plethora of cameras available. Amongst the digital cameras, the demand for long zoom digital cameras has been in the increment of popularity in the contemporary time. Since there is a vast confusion amongst the users about the newly launched cameras, the classical or a little bit old-fashioned camera models are now the options to switch. You may have guessed about it. Yeap, today we are here with the smart Panasonic LUMIX FZ300 Review.

As it was first launched in the market in July 2015, the LUMIX FZ300 was the super camera with longer zoom facilities and a great 12 MP camera. While changes in a variety of sectors from its predecessor FZ200, the sensor and the 24 to 600 mm, f/2.4 aperture lens. Moreover, it has improved a lot in the reshaped body and display tilt features. All those make it a better performing versatile 4K HD multimedia camera within budgets.

Oops! we may have made the intro longer, let’s move on to the primary discussion about Panasonic LUMIX FZ300 review below.

This Long zoom camera is a robust performer when you will use this for capturing with zooming, it will provide you pictures with superb clarity even you use the longest coverage zoom through it. It provides very well judged 4K images and videos this has stunned all the users. After that, it has the ability to shoot RAW images with great transparency. Now about the built-in mic and the output flash, both are just awesome with their performances.

When you capture images with this LUMIX FZ300 camera at threw decent light, you will see the best bridge camera for birding and wildlife, just stunning and speechless. The autofocus is also pretty much fast and accurate as well as the zoom. It has the ability to shoot pictures and videos in different modes(shutter priority, aperture priority, full manual, or full auto). This camera is just launched with huge updates from the Panasonic FZ200, its predecessor. 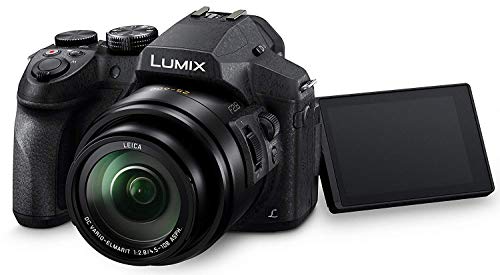 Panasonic LUMIZ FZ300 has superb quality cheapest 4k Camera, thus you can express your creativity in your photos. There are three 4K modes included in it, they are 4K Brust, 4K Burst S/S (Start/Stop), and 4K Pre-Burst for a clear and precise image shooting. These 4K modes will let you capture photos from videos as well. The 4K burst second mode is for capturing 4K videos as well as extracting them using the play pause buttons. The 4K pre burst manages the images by recording them seconds before and after. Moreover, the 4K uses 30 frames per second and high technology for stunning HD images.

The Panasonic LUMIX  FZ300 has a LEICA DC VARIO ELMARIT lens which will let you capture images with full features and quality. The LEICA DC VARIO ELMARIT lens has 25 to 600mm zoom features as well as an F2.8 aperture that will make your pictures jaw-dropping beautiful. This long-zoom camera has the ability to shoot stunning images throughout the full long zoom area even in the low light environments. It is the best low light professional video camera.

The LUMIX FZ300 comes with a splashproof or dustproof sturdy build quality with secure ties on each point, dials, and buttons. thus it stands still with the best performance even in the rude climate stations and challenging circumstances. It has a 5-Axis HYBRID O.I.S. (Optical Image Stabilizer Plus) that reduces blur from single-handed video shooting by recompensing for five kinds of action. The Depth From Defocus and the Auto Focus features immediately measures the distance between front and back and quickly brings the point into focus in one quick, continuous action.

Q: Does the camera support time-lapse movie creation in the camera?

As this is a digital camera as well as has some quality features, it also has the time-lapse feature without any doubt. Moreover, you will be able to set the time intervals when you do the time-lapse videos.

Q: Does this camera have GPS?

Q: Does the camera comes with a lens hood?

A lens hood makes the photo shooting more easy and accurate thus it balances the overall quality, grade of the image capturing. Panasonic LUMIX FZ300 has a decent lens hood for photo shooting. You can use this in the outdoor or in the daylight for better results. Do not use this with the flash of the camera.

Panasonic LUMIX FZ300 is the enhanced and improved version of the FZ200, and there are some noticeable changes that can be noted. The camera delivers overall good quality photos as well as upgraded ergonomics in the image shooting. The rear display and the newly launched EVF is also great for imaging. The versatile 25 to 600mm long zoomed and F2.8 aperture lens is also the key attribute to consider. The faster autofocus as well as 4K video and imaging feature makes it even better.

This camera is not with the best resolution sensor camera `as from the features of the 12.1 MP sensor, there are far better sensors available in the market in the lead position. Besides, the camera body is pretty much bulky as well as when shot in the lower ISO, it produces excessive noise in the default format. It has both the best features and some side effects. But those cons are not a big deal for those who want a decent photo camera within a medium budget range. You won’t feel regret after buying it, go and make the wise decision.

Check out: Melatonin: A treatment for erectile dysfunction. cialis malaysia price ED may be a symptom of an underlying medical condition, so consult your doctor.