For ensuring a speedy WiFi signal across your whole house, a mesh system router can perform and add some extra satellites that firms the overall requirements. If you are facing dead zone issues with your WiFi router in some spots of your house because of the poor coverage, then it’s time to make a change.

In 2021, here you have a plethora of options to choose from the market that has welcomed some great WiFi systems which are fast enough to hit your demands. Since we have been testing these WiFi systems for years, we have found two amazing mesh system routers that impressed us. They are Nest Wifi from Google and RBK50 from the Netgear Orbi series.

Both Google and Netgear come with a mesh system of two pieces that you can easily set and control over the help of an intuitive app. Also, from our observation, these routers have performed greatly with an identical display. Don’t miss out on the details as we are going to discuss a comparison between Netgear Orbi Vs Google Nest WiFi here.

Netgear Orbi Vs Google Nest WiFi: What Are The Main Differences? 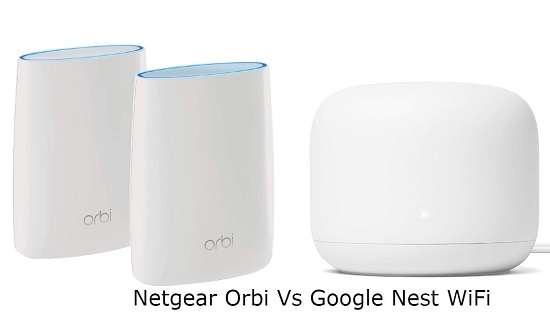 Have a look at the brief comparison that will allow you to differentiate these two mesh system WiFi routers in terms of features, performance, and budget. Thus it will assist you to select the one that suits your needs.

Both of these best WiFi router for multiple devices are made with a perfect and stylish design. But the designs of these two are not the same, Let’s find out the differences between the design and build quality of these two.

Netgear Orbi is a 10 inches tall mesh WiFi router that has a fin-shaped satellite-looking design. They are not round shaped like the Google nest routers, rather built in a long head or tall shape, like a satellite. Netgear Orbi RBK50 is available in white color and it has a top shade covering in blue color.

Netgear Orbi is designed in a futuristic shape that spreads out in the field of performance. Orbi comes with a WAN port that is able to absorb and correlate incoming speeds of up to 2.5 Gbps. The satellite-looking Orbi router features 4 specific Ethernet ports and jacks thus deliver speeds faster than Nest WiFi.

Google Nest WiFi is created with a design that pretty much looks like a marshmallow, they are not built in a tall shape like the Orbi routers rather look round shaped. The nest WiFi routers are available in different smart cute-looking colors-  white, coral, or blue choose one of your preferences.

Google Nest AC2200 is made of a stylish compact design that will suit and blend with the interior. Looks like a set of Smart speakers, this Nest AC2200 is a range-extending WiFi mesh system, that spreads faster WiFi signals across your whole home. The Google Nest router comes with a single spare jack on the top, no jacks are included on the satellites.

The primary element that a router needs to have is the great speed that will allow the user to get access to smooth usage and faster streaming without lagging issues. Both the mesh router systems are made with decent speeds, but they are not the same. Let’s find out the differences between them.

Netgear Orbi RBK50 has a faster and better speed frequency range and data transfer speed than the Google Nest. At our speed test, we have found that the Netgear Orbi is far faster and smooth in performance than the Google Nest. Netgear stands at the top speed of both the basic 5 GHz band and the 5 GHz backhaul band at 2,400 megabits per second, with the 2.4 GHz band coming in at 1,200 Mbps.

But there is a matter which needs to be known and that is, both the mesh system routers have performed pretty much lower than that of which was included on the specs box. In the show-off time, Netgear has displayed a speed of nearly 870 Mbps within the range of 5 feet. And when the range extends to 70+ feet the speed drops at just 650 Mbps which is a strong performance.

From our analysis, we have found the highest speed and best bands from Netgear Orbi, but Google Nest AC2200 fails in this factor. Nest doesn’t show off its best speed at the time of measurement. But after all, if you go for combining each of the bands the total speed will stand at nearly 2200 Megabit per second. We have tested these routers with Macbook as well as with laptops that have updated WiFi 6 radio compatibility to get the best out of them.

In the speed bar, Nest was not able to hit the speed like the expensive mesh routers that cost more than this, but it has still notched the speed meters. Google Nest AC2200 has displayed a speed of nearly 610 Mbps within the range of 5 feet. And when the range extends to more than 70 feet the speed drops at just 430 Mbps and this is an overwhelming performance.

When you go for a Mesh system WiFi router you always give priority to the coverage. Because, for removing dead zones and availing an overall smooth coverage for thoroughly your home, you have switched to mesh systems. So, it is a crucial factor for these satellite mesh routers to provide great coverage. Let’s see how much these two can perform in the coverage part.

In terms of the Nest Wifi, the overall average across my whole house was 220 Mbps. While I was moving from one room to another room the connection was pretty much solid, And that’s what we get from the Google Nest AC2200. While I was in a close range, at that time the router performed at an average speed of 280 Mbps. The speed and coverage were not great as the Netgear Orbi router but still, it is a moderate performance that we got from a budget mesh router.

For better as well as easy using the app-based control plays a key role for any devices in modern times. Similarly, both of these routers are made with an easy app-based control and management system.  Let’s go down to see if there was any difference between these two mesh system Wifi routers.

Netgear Orbi RBK50 is packed with an app-based easy control over many Android or iOS devices which ensures better user satisfaction. At first, you will have to set up and manage the WiFi settings from the Netgear Orbi App. But note that the Google Home app is a little bit better polished than the Netgear Orbi App.

With Orbi, you will be able to check the status of your whole WiFi system, cancel or pause the Wi-Fi service to any of the devices on your local network or you can also perform a quick speed test without any hassles all through the intuitive app. But note that the Netgear Orbi app is not packed with many features.

For an easy and quick setup system, you can go for using the Google nest Wi-Fi App or the Google Home App. With the app control from any Android or iOS device, your setup and management procedure will be a lot easier and painless. First is that you will need to set up and manage your Nest Wifi system through the Google Home app.

This is a similar app that we usually use for controlling Google Assistant smart speakers and all other third party devices. So if you are already into that systematic way inside your house, then adding an extra Google Nest WiFi into the mixture of the system is probably going to make better sense. Moreover, if you are a user of  Amazon Alexa or do have some previous ideas about smart assistants, then Switching to Nest WiFi through the smart way will make you smarter than ever.

Netgear Orbi Vs Google Nest WiFi: Which One You Should Go For?

After the comparison, you have got the notion that Google Nest is a bit inferior to the Netgear Orbi in speed, performance, and coverage. Still, Google Nest can be a great choice if you are in demand of a mesh router that comes with smart looks, stylish design, easy usage as well as a decent service.

On the other hand, there are a variety of Orbi mesh routers available in the market that are better than this Orbi RBK50, but if we compare RBK50 with Nest AC2200, then the Orbi will stand further. Netgear Orbi RBK50 is a triband mesh router that will go far better in overall performance than the Nest. If you prefer a cheaper option then the Orbi will again go first.

Both Netgear Orbi and Google Nest WiFi are a great option for individuals who are looking for a mesh WiFi system router pack for covering their whole house that won’t have any dead zones. But these two have differences in each spare, starting from design, performance to the budget side also. The Nest Wifi is not so good for coverage and performance compared to Netgear.

A 5000 Sq. feet coverage is going to be prioritized over the 4400 Sq. feet coverage of the Nest AC2200. Moreover, the price of Google Nest is nearly 300 dollars where Orbi is now just at 265 dollars at Amazon. Finally, you can go for the Netgear Orbi RBK50 if you prefer budget-friendliness with great performance. On the other hand, if you are fond of stylish design and convenient usage over the service then Google Nest is perfect for you.