With the development of technology, many unimaginable objects have been discovered in the world. The Internet is one of them. In fact, the Internet is the utmost creation. GotW3 have been serving people by turning call service  into the Internet for all your devices. Being honest it is currently one of the most trusted internet serving brands. The best part of the GotW3 internet system is in how it provides you the internet you need. Not only your phone but also you can connect laptop, streaming device and even satellite TV system can connect to GotW3 Wi-Fi connection.

GotW3 internet is best for those who travel frequently or live in a rural area because it has some advantages over your existing cell phone plan or Satellite internet. GotW3 has only two plans. They both will help your router to connect to nearby cell towers for 4G and LTE internet. Here the difference is in the cell towers that GotW3 uses; The Urban America Plan for T-Mobile and Rural America Plan for AT&T. GotW3 is a cellular service which connects to cell towers to offer surprisingly fast internet.

GotW3 Internet offers two data plans. These data plans depending where you live;

This plan is best for those who live in urban or suburban areas. In particular near larger cities and comes in around $79.99 per month. The plan holds speeds up to 45Mbps, but be gnostic this speed highly depends on the signal coverage and distance you are from the cell phone towers.

As an alternative, the Rural America Unlimited Data Plan is addressed to those who live in remote and rural areas where other types of internet services are not available. This plan also holds speed up to 45Mbps, like the Urban American Plan, if you are far from the tower then you might get the lowest internet speed like 1Mbps without boosting equipment. The monthly service fee for this plan is also expensive up to $99.99.

What Users Are Saying About GotW3 Internet?

If you check the online reviews of the GotW3 Internet then you will notice some negative reviews about this Internet provider company. GotW3 is slower in speeds during peak hours. The company claims that there is no throttling where there are no hard data caps. The main problem of GotW3 is in data usage which depends on the type of activities. If you use data much for higher resolution then your data speeds will slow. So GotW3 suggests its user to use lower resolution to save data. 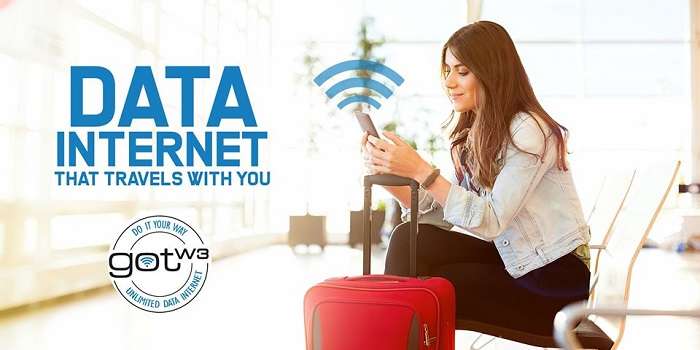 Comparing With Other Internet Providers

Viasat has made major improvements for a couple of years to its speed and reliability. Viasat still doesn’t relate cable or fiber internet. Viasat is the best satellite internet. So if you need a huge amount of data and speeds in this case Viasat is a better choice for you. But sometimes it slows down much even when you stay under your data cap in this sense GotW3 is better than Viasat. GotW3 doesn’t slow down when you stay under your data cap.

RCN Internet is the widest and powerful fiber optic network. It has a good value and acceptance to its customer for its high speed internet. RCN won an award as a high speed internet provider which offers reliable and affordable internet services in Chicago. Its internet speed is up to 940 Mbps. If we compare RCN Internet with GotW3 Internet we will notice that there is a far difference between their data speeds and price. The equipment cost and plans of GotW3 are outrageous.

FAQs about The GotW3 Internet

Q: If I use multiple devices at the same time can Wi-Fi be slow down?

Yes. If you use multiple devices at the same time Wi-Fi can be slow down. As the router can only deliver a mixed amount of data per second and that data has to be shared amongst all users so sometimes Wi-Fi is slow down when anything you download or transfer.

Q: Is there any charge for reconnection GotW3?

Yes. If you want to cancel you don’t have to pay a charge for this. But if you cancel your service but change your mind and wish to reconnect then you will have to pay $25.

Q: How can a GotW3 user get decent speeds?

Q: Is there any chat support or email in GotW3 internet?

No, there is no chat support or an email. GotW3 internet has a social site. If users face problems then they can see a few video tutorials on setting up a router and changing Wi-Fi and login passwords.But you can call GotW3 Internet provider company in this number following number 1-833-492-6893. If you need any support  or to pay the bill you can call in this number.

If you live in an area which can not operate regular cable and broadband then satellite cable is not the only option for you.You can use GotW3 Internet which is a serviceable alternative using 4G and LTE network.  Though the price of the equipment is high but those who travel or live in more rural and remote areas then it is an incredibly best option for them. So, those who want to eagerly use it but are skeptical about GotW3 can use it without any hesitation.

Myself Rony Jahid, most struggling manager of ResetTips, an ex full time top freelancer at (freelancer.com). A part time blogger and an affiliate marketer on various platform, who still runs after his goal.## Hobby or you can say bad habit, invest into calculated risk. #Ronyjahid

Google WiFi vs Netgear Orbi – Which one is best?

Get your product from best sellers