The idea of a mesh wireless network started in a military operation back in 2010. However, at that time this idea didn’t look so promising as it was in its infancy. However, now it moved from military uses to regular civilian uses and has become a remarkable technology that can solve the problem of large home weak network issues.

Now, the question is, what is a wireless mesh network? A mesh network is a group of routers connected to each other that act as a single Wifi network; which means there are multiple sources of Wifi single around you of the same connection instead of one router. The additional sources are known as points.

It’s not too long google also interred in this criteria, in 2016. But they are more famous than any other brands. Google Nest Wifi and Google Wifi are the best mesh WiFi system. Google Wifi came first and then succeeded by Google Nest Wifi. But they both are widely used by the public. In this article, I’m going to show you the difference between these two devices and which one will suit your situation. So keep reading.

What is Google Wifi?

Google Wifi is a leader in the mesh router revolution, even though it may not be the first one on the market. With it, Google not only simplified the design to make the mesh router look simpler and modern, it was able to offer users dozens of features and benefit at a decent price than other mesh systems of that time.

The best google mesh wifi comes with three routers (points) to set up in your home. Almost all of us use wireless internet in our homes and we want the freedom to connect the internet anywhere we want. But, if your house is large, you will face several dead zones. So, you place the google routers in different places inside your home and enjoy a blanket of seamless wifi coverage throughout the whole house.

In this system, the routers (points) communicate with each other wirelessly and create a large Wifi network that eliminates all dead zones and weak single issues. However, you have to first connect the main router via Ethernet and then place the Wifi points in different locations where signals are not too weak and it will amplify the coverage.

In terms of design, it is small and looks rather cool. However, it only comes in white and there is a LED light at the bottom of each point. Set up is also easy, so you don’t need to worry about technical stuff. You can operate it with the handy mobile app that comes with it. And, it works great with google assistant.

What is Nest WiFi?

Google Nest Wifi is a whole home wifi mesh system. It replaces your traditional router to provide more coverage and better speed throughout your home. Nest Wifi also has a speaker with Google Assistant, so you can play music, control support connected devices, and more.

Nest Wifi is designed with mesh Wifi technology. The router and points function in a way so that the connected devices can have the most bandwidth. This enables a strong Wifi Single in your entire house, instead of just near the router. And you can move from room to room without losing connection for a moment with minimal disruption on video calls, live streaming, or online gaming.

Moreover, the system is scalable, which means you can find the right number of Nest Wifi devices available to adjust the size and shape of your house. There are also several packs like Nest Wifi Single Pack, 2 pack, and 3 pack. Each point provides 2200 sq ft coverage, so 3 provides 6600 sq ft. Even if you need to cover more areas, just add a Nest Wifi Point.

However, what makes the Google Nest Wifi out of most Mesh routers is its ability to work with Google Assistant. Yes, it has a speaker with Google Assistant. That allows you to play music, manage your WiFi network, find answers, control your connected devices, and many more by just your voice command. This makes controlling this device super easy.

Even though the mesh system made it easy, the setup can sometimes cause headaches. But not in the case of Nest Wifi. You can set it up in minutes and manage it with the Google Home app alongside other options like voice command and control panel. The continuous updates automatically install and help your network to keep secure. And, it also offers advanced features like,  you can even create a guest network and share the password in a few taps.

Moreover, with the app, you can prioritize devices for faster speed and run speed tests to see the network speed. Family Wifi mode allows you to set schedules for screen time, restrict to adult contents, and even pause Wifi after a certain hour. Those come in under the parental control options.

Because of the three years of the time gap, Google Wifi and Google Nest Wifi have separate hardware capabilities. To start with Google Wifi is an AC1200 mesh system, which means the top speed of it is 1200 Mbps, combining both 2.4 and 5GHz bands. On the other hand, Nest Wifi is AC2200 and offers more capable access points than Google Wifi.

Both Google mesh routers support Wifi 5(802.11ac), which is the go-to version of Wifi for the last several years. But the new Wifi 6 is not available with any mesh, and Google decided to not include it with Nest Wifi.

But Google upgraded the antennas with Nest Wifi, boosting it up to 4×4 configuration which is capable of simultaneous MU-MIMO transmissions. This new configuration is more robust than 2×2 Google Wifi. Moreover, Nest Wifi also supports the newest WPA3 encryption standards; Google Wifi doesn’t.

So, in the end, you can say Nest Wifi is way better with speed and pass throughout the walls compare to Google Wifi.

What are the key features of Google Wifi and Nest Wifi 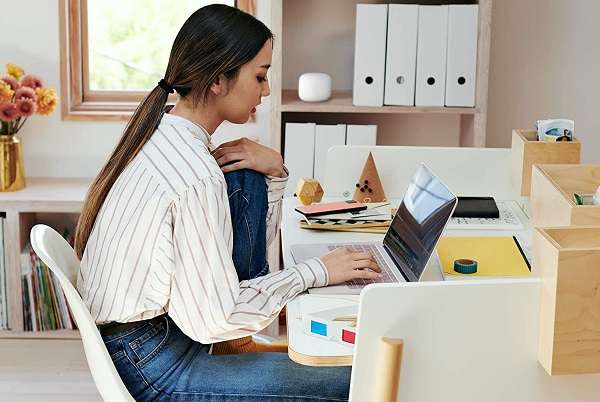 The design of both models is the same – cylinder-like. But a bit different is, the edge of the Nest Wifi is smooth and it also doesn’t have any LED light like Google Wifi. In terms of color, Google Wifi is only available in one color – white. On the other hand, the Nest Wifi router is white, but the pointers come in three colors – white, blue, and coral. You can choose any of these colors, matching your home.

If you ask me what is the most noticeable difference between these two home mesh systems, that would be their in-built hardware. The Google Wifi is modeled with the AC1200 wireless AC standard, which means it provides a combination wireless speed up to 1200Mbps and has dual-band support. On the contrary, the Nest Wifi is built with a 4×4 AC2200 mesh system, allowing more speed and coverage. Both of them are using Wifi 5 but, Nest’s 4×4 configuration is better than 2×2 Google Wifi.

Nest Wifi comes with a speaker under each pointer. This is another point of difference between these two models. Nest Wifi supports google assistant. You can summon it to play music, manage Wifi settings, ask questions, and control your smart home devices. Thus, with this, you don’t have to buy Google Mini, Google Hub, or other things.

Google Wifi vs Nest Wifi: Which should you get?

Both mesh systems are fine in their ways. Nest Wifi is the most recent upgrade mesh system, it provides more coverage, more speed, and better features. But those don’t come with 2016’s Google Wifi. This model is old, so it misses many upgraded features. In short, Nest Wifi is better in every way until you don’t consider the price of both products. Nest is almost cost double that Google Wifi. So, if you have budget issues, you should choose Google Wifi or else Nest Wifi is the best option for you.

Nest Wifi is the worthy successor which is better than its predecessor Google Wifi in almost every way. However, Google Wifi is a legend that transformed the mesh system when the mesh system was a distant dream. Both of them ensure seamless wifi coverage of your entire house without having to worry about any weak signal and dead zones.

But Nest Wifi took the step ahead with the increased speed and coverage with AC2200 wireless AC standard. So, I would highly recommend it for your whole home coverage.