In the extent of photography and printing, Canon has been in the leading position across other producers. To suffice the demands of general peoples and other professionals, Canon has a wide variety of collections in the printer segment. Amongst all other series, Canon PIXMA and Canon ImageCLASS have been in the hype because of the versatility, feature-richness, and affordability of these printers. 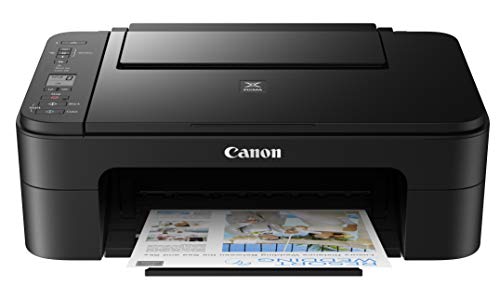 Now, we are moving towards the Canon PIXMA series which has been characterized as the most popular for the budget friendliness and essential features. Furthermore, compact design, compatibility with a broad range of office environments, variety of specs, upgraded interfaces, stylish design all make this series of printers a dealbreaker for most individuals.

Including this content also initiates with a classic, smart featured, and budget-friendly printer from the Canon PIXMA series. Canon PIXMA TS3320 is a basic inkjet printer without any frills which keeps printing operations simple and convenient. This printer is most suitable for a home environment that doesn’t require a huge workload of prints. Have a glance at Canon Pixma TS3320 Review to acknowledge more about it.

Amongst the vast collection of Inkjet printers, we have restricted the pathway to these two equally specified inkjet printers. This will give you a better conception of inkjet printers as well as let you compare and pick the best one according to your needs.

The Canon PIXMA TS3320 Inkjet printer is a pretty much satisfactory printer from the PIXMA series if you consider it in overall aspects and factors. The operating cost won’t be a headache since it delivers quality prints, as well as the operating cost, is pretty much lower than others. That is why the users have adored and became satisfied with this product. To name it we can tag it as one of the best printers for homeschool. Furthermore, if you stare at the reviews on Amazon of this product’s page, you will get the feedback of the users in short.

It is made with a 2 FINE cartridge hybrid ink system which works as the perfect choice between appearance, feature, and expenses for documents and images. However, I haven’t found any issues with it but some of my friends have complained about the ink issue. The ink is not always delivered with the box, but I have got the 2 cartridges safe and sound with my box. With all that being said, I have discovered it as a budget-saving option, if you want cheaper than that you can have a look at the best wireless printers under $100. 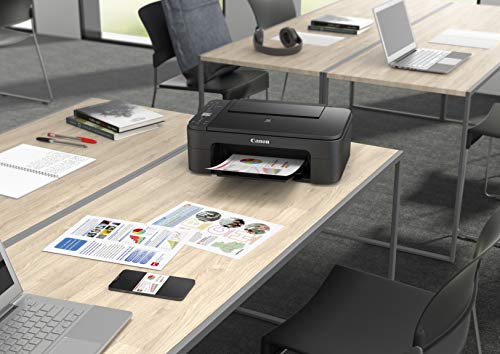 If you go for this TS3320 inkjet printer, you will find out that this doesn’t take more than 5 to 10 minutes to print the first page after the unboxing process. Since it is made with a wireless connectivity feature, all of the hassles of setting up go away with minutes.

With the help of the built-in WiFi, you can set up and print with your smartphone.  Moreover, the 1.5 inches Segment LCD screen with straightforward buttons allows you to adjust the settings and the operating process simple. Besides, You can easily load plain paper or photo paper with the dedicated Rear Paper Tray.

With the PIXMA TS5320 printer, you will be able to print B & W photos and documents from your smartphone as well as print color photos with a smooth level of clarity. Side by side with voice-activated printing and Alexa Compatibility accomplishing the printing tasks will become easier and hassle-free.

Besides, the dual paper feeding and auto-duplex system printing are stacked for utmost convenience. With the Canon Pixma TS3320 wireless printer, one can enjoy a quick and fluid operating using the Canon Wireless Connect technology. Additionally, in no time you will be able to print crisp black text & documents, and vivid 5 inches x 7 inches borderless photos and all come from two FINE Hybrid ink cartridge systems.

While addressing the build quality and design of this Canon TS3320 printer, it is pretty much attractive and smart in this aspect. Also, the sleek and compact design makes it simply fitting for any kind of basement whether it is for a house or any office. Further, it is originated with a smart black colored texture to match your location and choice.

As it has a variety of great features to use for a small home office, it is not overpriced if one considers the price with the attributes. It has a list price of 119 dollars which falls inside the category of a budget-saving entry-level printer. WE have mentioned before that one of the best attributes of this Canon PIXMA series is its reasonable budget tag.

Q: Does it scan multiple pages?

The straight forward answer is, Yes it is compatible with multiple page scanning at a time. But there is a catch, if you go for printing with Mac, it can be a lot easier. But if you move with Windows printing, it can be a little bit difficult to perform.

Q: Does one have to use only Canon inks?

Yes. If you tend to use any other third-party inks other than the Canon-compatible inks for this printer, it will show problems while functioning. Following, you may encounter the problem of being stuck in the middle of the printing process. This may result in invalidating or discarding the printer.

Q: Is it compatible with all operating systems?

It is compatible with both the Windows and Mac operating systems. Besides, it supports iPhones, iPads, and Morphia for Android-based printing. Besides you can print photos from your devices through the Canon Print App and which is available at Google Play Store or Apple App Store.

While going to purchase a photo printer or a great printer for a decent amount of day-to-day plain paper prints, it is tough to find a cheap option since the market is loaded with such competitive printers. But this superb device from the Canon PIXMA series has been a blaster.

The Canon Pixma TS3320 prints scripts, graphics, and images thoroughly for its cheap price, obtaining it good basic for families with evenly print and copy demands. Canon TS3320 is a dealbreaker option for individuals who hold a small home office and want to obtain a smart printer under the capacity of their pocket.