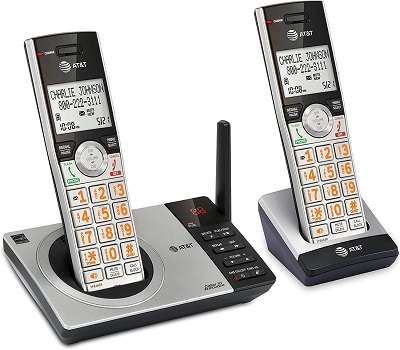 As we were looking for AT&T cell phones for seniors, we came to know about this cordless phone.

It has a large screen, big buttons, and an easy-to-use interface. So, we researched the product thoroughly and wrote this AT&T CL82207 review.

We not only took the expert opinion but also considered the shared experiences of the purchasers. So, let’s see how this phone is worth your money and loved by hundreds of people of all ages.

Feature-wise, we think AT&T CL82207 is one step ahead of the other one. But make no mistake, as both are great phones with some minor differences. 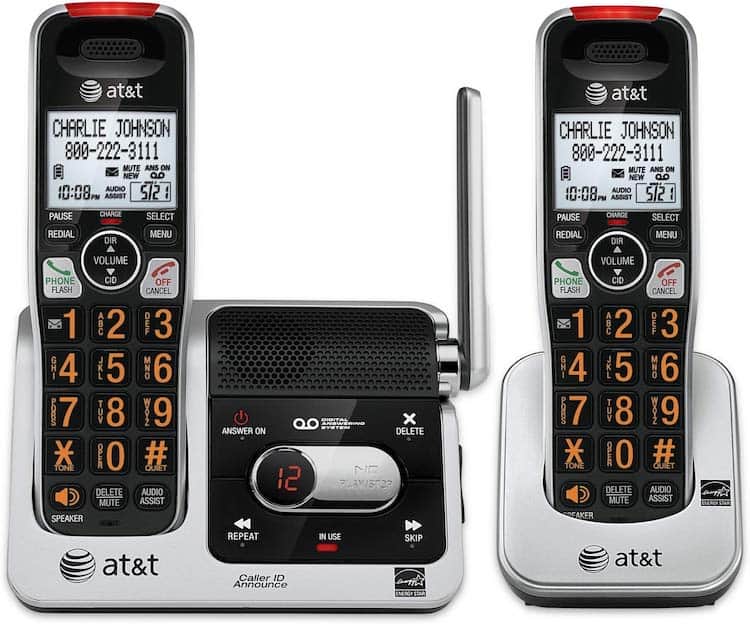 For different requirements, we prefer one of them over the other. UNLIKE OTHER COMPETITOR PHONES, the CL82207 comes with an advanced and improved call blocking feature. So, we think large or small homeowners should get this phone.

On the other hand, the At&t dect 6.0 CRL82212 is best for an office environment where the managers should also look for AT&T phones for sale without contract. It is because the phone has minimalistic features and reliable functionalities. Now, let’s continue with the opinions of the buyers. 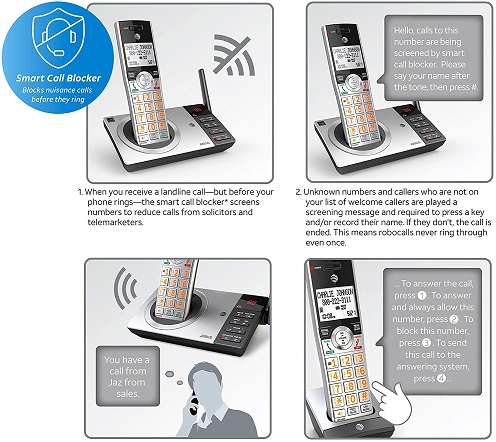 Like other AT&T cordless phones, this one also ensures the best audio call quality. Apart from the earpieces, it has a loudspeaker option which comes with full-duplex technology.

This is an important feature to talk and listen to at the same time without having any trouble. Otherwise, with a half-duplex feature, you won’t have this capability. In this case, it will be like using a walkie-talkie, and it is not a pleasant experience to have.

For an unsuppressed range over a large area, it has the DECT 6.0 technology and the capability of allowing 12 handsets. Talking with wireless handsets can often be disturbing because of other unwanted signals from other devices. You can call them noise, and this phone has advanced noise-canceling technology to prevent those.

To ensure flexible ways of managing calls and relevant messages, it has a lot of features. These include a remote access feature, quiet mode, one-button intercom between handsets, a digital answering machine, and a loudspeaker option.

We are considering the CL82207 as one of the best AT&T phone systems for a home because of its features. For example, it has a caller ID announcement to know who is calling without getting close to the phone set, a customized voice-guided digital answering system, quick call blocking feature, and other general functions of a phone.

For prolonged battery life, it requires two small lithium metal batteries. With those batteries and their unique ECO mode, you will be getting long hours of talk time.

We received many different AT&T CL82207 reviews from the buyers, but one thing was common. It was the feature of its advanced call blocking, which rejects auto software-generated calls without even ringing.

Also, it allows you to block calls from 1000 different numbers, which is more than enough. However, this feature may cause a problem in the case of connecting it to a fax line. So, the automatic call blocking hampers the fax signals assuming it is a robocall.

After using it for over a year or two, the battery life may be reduced. Otherwise, we think you won’t face any significant problems, and it will continue serving you.

How worthy AT&T CL82207 is compared to features and performance

Comparing AT&T CRL82212 DECT 6.0 wireless phone with other land phone models from different manufacturers, we think it is worth investing our hard-earned money. From years of user experience and expert opinions, this could be one of the best DECT 6.0 cordless phones.

The manufacturer promises an advanced call blocking mechanism; how does it work?

The mechanism works in two parts: one is automatic, and another is manual. The automatic part blocks robocalls by asking for names and then requesting to press a button.

If a marketer passes the test and you have to pick up the phone, you will still be able to block them manually by pressing the call block button on the bottom. This will end the active call and forever put the number on the blacklist.

The base has DECT 6.0 technology, so can I connect a headset to the phone system for true hands-free calling?

Yes, there are headset accessories available, and you can use one of those that are compatible with the phone. The connection and clear conversation happen due to its Bluetooth technology.

Can I set a custom greeting for the voice message feature?

The phone comes with a default message set by the manufacturer, but you can easily change that with your message.

Will this phone allow multiple parties to talk at the same time?

What you mean is conferencing, and this phone is capable of placing a conference call. The limitation is that you can call one outsider with four inside handsets.

So, connecting multiple people outside won’t be possible with this one. If you need that feature, you should look for other phone models with multiple-line support.

From the AT&T CL82207 review, you won’t find the exact words of real-life users. So, we recommend you to have a look at the honest opinions and then decide whether to go for it or not.